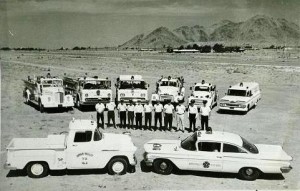 The Apple Valley Fire District was formed in January 1951 and conducted its first meeting of the Fire Board on January 25, 1951, in the old Apple Valley Post Office Building.

Up until the mid-1970s, the volunteer firemen were alerted by loud sirens that could be heard throughout the community; subsequently, personal pagers were issued. By 1981, a joint powers authority (JPA) was created with the local fire agencies to share the costs of modern dispatching of fire resources with the eventual expansion of providing fleet-maintenance as well.  This JPA was known as the Regional Fire Protection Authority (RFPA).

In 2016, with the Measure V special tax set to expire in 2017, voters overwhelmingly passed Measure A.  Measure A allowed for the re-opening of two closed fire stations and the revenue to sustain the Fire District into the future. 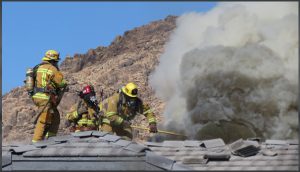 Since these early “pioneering” days of the Fire District, the District boundaries and services have grown to meet the needs and demands of the community. Today we serve over 90,000 citizens and cover 206 square miles. The Fire District has always taken pride in keeping up with advancing service technology and modern fire service delivery systems. A main component of the Fire District, which has remained unchanged, is the dedication of District employees to their occupation and community.

Board Meeting
August 17, 2021 at 6PM
To be held at Mojave Water Agency
13846 Conference Center Drive AV
Public is Welcome to Attend